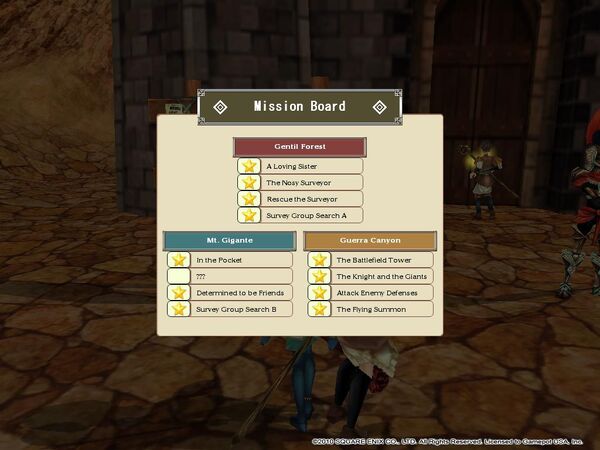 Note: FEZ's tutorial is one of the worst tutorials created so may get easily lost. If you are still confused with this guide then have a good look at the video support at the end of the page. Also it is notorious by players for not teaching anything about the game itself (exception of yellow letter which does have a number of errors).

After logging in with your character you will be redirected to tutorial/Garrison by the NPC Colt. The Beginner Shield will be placed on your character indicating that you are a beginner (Removes itself after 20 completed wars). You may leave the Garrison at anytime using backspace and can return and time by talking to the tutorial NPC. If have not completed the tutorial, you will be redirected back to the garrison everytime you log back in.

You will now the be directed to the tutorial after talking to Colt.

Here you will explained with the basics of moving and camera control. (Displayed to the left)

Move forward and kill 5 spiders. (Note you need to move forward after you kill 5 as it the tutorial will not redirect after you have killed 5.

Note:After you have completed this step your icon will be replaced with the beginner icon to show other players you are still new. The Icon will be removed when you have played in at least 20 wars.

As you talk down the road you will see a soldier on the road (he has a sword on his back). Talk to him until you receive a piece of headgear. Or select "no"

As you walk down you will see a person being attacked. Kill the mob requirement and talk to her. Then you will be redirected to anothe map.

You will be rewarded a regen for helping her. Now press I and use the regen you have been given. Then talk to her again to receive another one. Mission 3 Complete and now walk down the road again.

You will meet Lateshia and will be given a quiz on how much you learned in the tutorial answers to the questions is below in English. Or (1st,3rd,2nd,1st,2nd,1st,3rd,4th,1st)

What do you need in order to learn new skills?

When are new skills unlocked for you to learn?

When your skill level is 3

Where do you put skills in order to use them?

Do skills depend on your equipped weapon?

Warriors and Scouts can equip 2 types of weapons. What about sorcerers?

What item is used to reset the skills you've learned

After you have completed the quiz; You will be rewarded with a new weapon and will be given the choice to switch classes or reset your skills. Select no and return to the garrison. You still have this function available until you have reached level 20 just return to anytime to reset your skills.

Blue can only be accepted when the Red Letter is completed. Receive the blue letter and walk up the path that the captain is facing.

On the mountain path you see a boy. He will ask you for some bread. For each bread you give him you will receive one Hi-Regen. (Up to 2 Max)

You will see an old man on the way up talk to him. And he will trade you a piece of equipment he wants to give to his son. (Your inventory must not be filled, press sort to clear up some space or throw away an item). The son is located at the same place as the 4th mission. This mission is not completed until you have delivered the item.

As you go up you will see a random person on the road talk to him to receive a free apple.

Keep walking up and eventually you see a person been attacked by a griffron. Kill it and talk to the person and you will be redirected to a new map

Talk to the person that was attacked and learn about classes. Now you have completed the blue letter. (Note the son in the 2nd mission is to his left. Select no if you havent talked to him yet) Now talk to the person to be sent back to the garrison.

Yellow can only be accepted when the Blue Letter is completed. Recieve the yellow letter and walk to the path that is to right of the captain.

Now deliver the letter to the soldier in black. In order to complete the Yellow letter all missions must be completed. Although you can do them in anyorder. Once of all of the missions have been completed return to the captain to receive your reward.

Build as many obelisks to control as much terriority as can under the time limit.

The Knights and the GiantsEdit

Mine crystals and summon a knight to kill all enemy giants

Mine crystals and summon a giant to destroy enemy structures

Summon a dragon and defeat all enemies in the time limit.

Retrieved from "https://fanearthzero.fandom.com/wiki/Tutorial?oldid=13958"
Community content is available under CC-BY-SA unless otherwise noted.