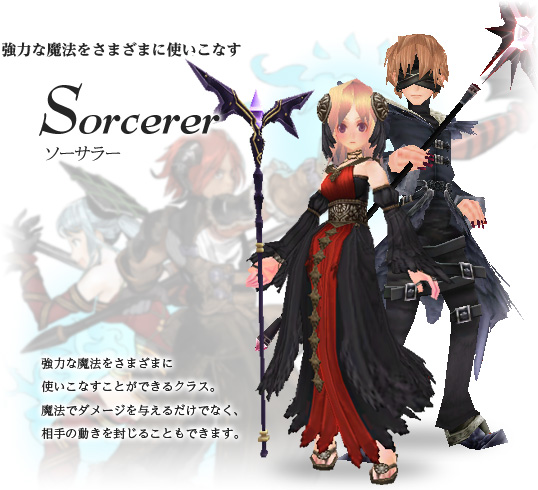 "Intelligent, quick-witted, crafty; Sorcerers rely on these inner qualities as well as devastating magic power to terrorize opponents. Sorcerers wield total control over Fire, Ice, and Lightning to unleash a variety of spells depending on the situation. Sorcerers are strong against Warriors but weak against Scouts."

Sorcerers may equip 2 different types of weapons: a staff or a familiar.(Note: the tutorial answer is still 1) Staff skills may only be learned by reaching the pre-requisites while the familiar only skills must be learned by familiar tutor.

Requirement: Lightning;Casting must be active

Requirement: Lightning; Casting must be active

Retrieved from "https://fanearthzero.fandom.com/wiki/Sorcerer?oldid=14182"
Community content is available under CC-BY-SA unless otherwise noted.