Currently there are 16 known buildings in FEZ but I won't explain the Chronicle buildings until more info is availible.

Note that all buildings require a certain amount of crystals before building or has a minimum requirement. Buildings will turn dark and smoky when hp is low. Note that everything is here is listed for per side.

Obelisks and Eclipses are only buildings in game with an Alert Level, as the Alert Level of a building increase the more damage it deals to the base when destroyed. There are only 3 alerts levels right now (Levels 1-3) 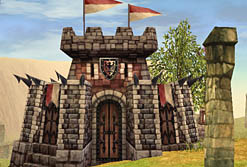 The keep is the main focus of FEZ. To win a war the enemy's keep must be destroyed by depleting the morale bar. When the morale bar drops to 0 the base is destroyed and the side's whose keep is still standing wins. Note wins do not exist and when a battle is timed out victory will go to the defending side.The keep's hp can be depleted only by depleting morale, morale is depleted when players die, by terriority and by directly attacking the keep itself. However terriority deals the most damage while both directly and killing only deal small amounts. The keep is the location where players spawn after dying and where they can enchant their weapons. It is also capable of summoning knights, chariots and chimeras after fullfilling certain requirements. Note that the defending side's keep is always preset and the attacking side may choose its location before the war starts afterwards no sides can change keep locations. Note that a keep can attack nearby enemies with fireballs that deal DoT damage. 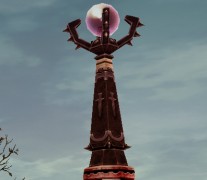 A vital building in the war system. The obelisk allow you to expand your terriority, erase the Fog of war and deal constant terriority damage to the enemy keep. However damage will stop increasing after you have completed 56% of terriority and will only deal constant damage. Obelisks can only be built in your own terriority and can prevent enemies from expanding provided you have enough obelisks spread out. When an obelisk is destroyed you take damage depending on what level the obelisk is. Obelisks alert levels start at 1 and grow to level 3. The higher the level the more damage dealt to morale when it is destroyed.

An Eclipse is a mini-obelisk that allow you to expand into shared terriority and has the same effects of an obelisk with the exception that its effect is smaller. ALong with that an Eclipse's HP is also relatively smaller than an obelisk and is recommended to be used in the front lines to stop enemy expansion

A building that allows players to summon giants after acquiring 20 crystals. May only be built in allied terriority, cannot be built in shared. Once destroyed Giants will be forced to desummon.

A defense building that is used to enforce battle lines. Works more effectively with more towers built around each other. Cannot be built in shared terriority. Firing speed can be increased with Cestus' Sacriface.

A building that is used to summon a Wraith after acquiring 50 crystals. A Gate of Hades has very little hp and once destroyed it cannot be rebuilt. Cannot be built in enemy terriority. Strongly recommended to build near base. Once destroyed the Wraith will be forced to desummon.

A defense building is normally used as a wall to obstruct players from using a path. Bulwarks typically have very large hp compared to other buuildings so destroying one will take a while. Also a bulwark can be used to give players access to a certain parts of a map like an elevator. Can be built in shared terriority.

A defense building that is used to give higher leverage or used a shield. Each player can summon one per war and has very little hp and can be built anywhere. 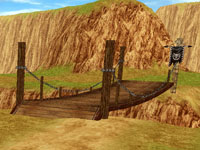 A natural building that is used to give players access to certain parts of a map. Only availible in some maps and can only be damaged when the flag next to the bridge is damaged. This building cannot be built 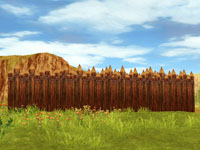 A natural building that is used to obstruct players from entering certain parts of map. It is only availible in certain maps and cannot be built. </li>

Retrieved from "https://fanearthzero.fandom.com/wiki/Buildings?oldid=13916"
Community content is available under CC-BY-SA unless otherwise noted.